Medicaid is not part of the Affordable Care Act. It’s been around since 1965 when President Johnson signed both the Medicaid and Medicare bills into law.  It’s future, however, has become tied to that of the ACA because of Medicaid expansion.  That’s the part of the ACA that gave states the option of expanding who qualified for Medicaid. In the 32 states that did this, 11 million newly eligible adults gained coverage.

Medicare, Medicaid, the Children’s Health Insurance Program, and Affordable Care Act marketplace subsidies together accounted for 25% of the budget in 2015. About 2/3 of this went to Medicare which provides health coverage to people over 65 and those with disabilities.

The Republican health care plan would shift Medicaid funding to a block grant model that would cap the amount of federal funding each state gets. These caps would not take into account state level differences in things like population demographics or health care prices.  This means states will have less flexibility than they currently have in who they fund and at what levels and states will be less able to respond to changing needs. This effects a significant number of our fellow citizens. 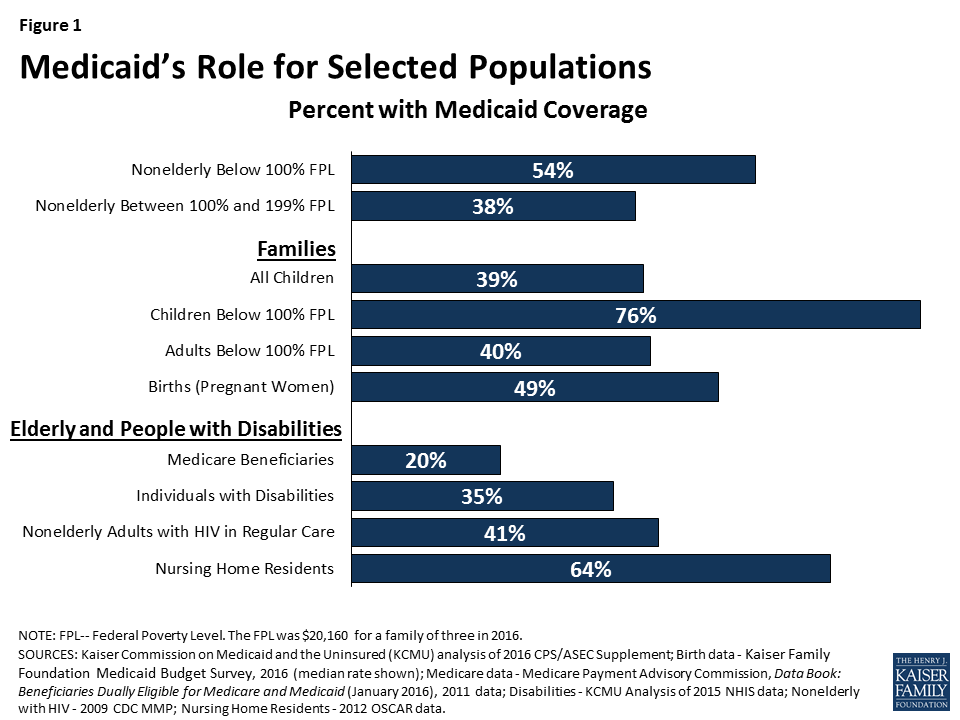 Medicaid is the main source of financing for long-term care in the United States.

This can include older adults as well as people with disabilities and chronic health conditions that limit their daily functioning.  Long-term care services help with daily self-care like eating and dressing and household activities like meal prep, cleaning, and managing medications.

Long term care may be provided in an institution like a nursing facility or a group home, but can also be provided in the individual’s home. In fact, most long-term care is provided by unpaid caregivers like family members with the help of home and community-based services.  These esrvices keep people who would otherwise be in nursing homes living independently in the community.

The number of people needing long-term care is growing.

So what is likely to happen under the Republican plan?

A number of things are likely to happen as state budgets feel more pressure from the federal caps.

There could also be negative effects on health care premiums more generally.  Marketplace premiums in states that expanded Medicaid are about 7% lower than in non-expansion states.  This may be because including a wider range of people in Medicaid changed the compensation of the risk pool in these states.

There you have it.  And because it is #justthefactsfriday and I don’t know everything, corrections, additions, and conversation are welcome.