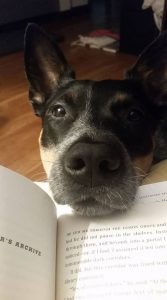 Since last year’s birthday tribute we’ve embarked on a new doggy adventure and become a registered therapy dog team (not to be confused with a service dog which is a whole different litter of puppies).  Therapy dog teams volunteer to visit hospitals, nursing homes, and other places to bring some puppy love to people in need.  As a therapy dog team we have been tested by the Alliance of Therapy Dogs to make sure we are a good fit for this work and we are members of Therapaws of Michigan a volunteer organization that coordinates visits for therapy dog teams like us.

For those who haven’t met Loki before, she is an Australian Cattle Dog, sometimes called a Blue Heeler.  A herding dog is not what typically comes to mind for a therapy dog. They are very energetic, extremely stubborn, and are often not particularly interested in people outside of their own family. They are sometimes called “Velcro dogs” because they do not like to be too far from their people. And, indeed, Loki is draped across my feet as I write this. Up until a minute ago all 55 pounds of her was in my lap. When I get up to refill my coffee she will follow me into the kitchen.  It is said that with a Cattle Dog you will never have to go to the bathroom alone again.  On the other hand, Cattle Dogs are smart and they need a job that works their mind as much as their bodies – otherwise you end up with something like this: 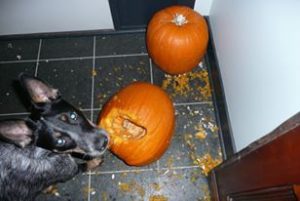 For whatever reason, Loki has been a people person from the moment we got her.  But, when she was about nine months old we met a dog whisperer in the shape of a three-year old girl.  This girl knelt down and Loki immediately dropped to the ground, belly crawled over, and laid her little puppy head in her lap.  My husband and I were astonished.  Loki was friendly and loved meeting people, but usually in a burst of irrational doggy exuberance.  We were (and honestly still are) working on the no jumping thing.  Not long after that we encountered a gentleman at the park who was a bit wobbly on his feet.  Again Loki surprised. She carefully sat down at his feet and let him pat her head and then immediately turned to the non-wobbly person next to him and jumped around like an idiot.  A seed was planted in my head that Loki might be a good therapy dog someday.

Now we are one of four therapy dog teams that do weekly visits with patients at a forensic psychiatric clinic.  About 8 patients do pet therapy for a month seeing a different dog each week and then a new set of patients rotates in.  That means Loki and I do one visit a month for about an hour.  It’s such a small thing, but patients (and staff) are so happy to see Loki walk in the door. They get some hugs, toss a ball around, and we chat about dogs they’ve known and loved.  Anecdotally from the staff and from my own observation, this small thing seems to make a significant impact for the patients who are having a hard time and the staff who do a tough job.  They all look forward to Pet Therapy Day.

There is some research to support my personal observation (you knew that was coming, right?).  There is some scientific evidence that puppy time activates happy parts of our brains . Other research has found that animal assisted interventions ranging from the more informal work that Loki and I do to more structured treatment approaches have positive effects for people with dementia and patients who are critically ill.  Benefits for psychiatric patients in particular include reducing anger, anxiety, depression, and general distress, and improving socialization (Rosetti & King 2010; Souter and Miller 2007). A recent review of randomized controlled trials (comparing a group that gets some sort of treatment to a group that doesn’t) found that even a relatively short time spent with dogs had positive effects on symptoms and overall well-being for individuals with schizophrenia and all but one of eight studies reviewed found positive effects for animal assisted interventions (not limited to dogs).

Of course, dog alone is not enough.  People suffering from mental illness need access to medications and other therapies to manage their health just like those with diabetes and other physical chronic illnesses.  That means access to health insurance to pay for those treatments.

The battle over the Affordable Care Act is not in the headlines right now, but that doesn’t mean things aren’t happening. The Trump administration is quietly chipping away at ObamaCare in numerous ways.  If access to health care and universal coverage (including mental health care) are things you care about, let your Federal and State representatives know and remember 2018 elections are right around the corner.

Recently my friend and author Teri Case wrote about her family’s nursing home experience. Her mom, Bonnie, was discharged to a nursing home for rehabilitation after being hospitalized for pneumonia.  This isn’t unusual.  Nursing homes are often used for short-term rehab.  On the one hand, this is a good thing. Hospitals are not healing places and a rehab facility can be a good place to recover until it’s safe to go home.

On the other hand, according to 2015 data from the Centers for Medicare and Medicaid Services (CMS), 70% of nursing homes are private, for-profits. They make money when their beds are full and once someone’s in a bed it’s to the facility’s advantage to keep them there. Teri’s family saw their mother declining with very little rehabilitation happening.  At the same time, they received lots of pressure to move her in permanently rather than returning her to the assisted living facility she called home.  Teri writes with humor and eloquence about how they busted their mom out and got her home where she has recovered nicely. It’s a story with a happy ending because Bonnie reached out to her family and they listened, asked the facility questions, and acted when they didn’t get the answers they wanted.

This is not to say that private, for-profit rehab facilities are inherently bad or even that in Bonnie’s case the staff at the facility didn’t truly believe they were acting in her best interest.  In general, health care professionals enter the field because they care about people and want to help them.  But they’re working in a faulty system.  When health care and profits become so tightly entwined, profit more often than not wins out over quality patient care.

This makes it all the more disturbing that the Trump administration is working to relax regulations on nursing homes and make it harder for residents to sue for substandard care, abuse or neglect. The administration argues that dealing with health inspections and meeting regulatory requirements is taking staff away from spending time with patients. They ignore the fact that facilities are routinely understaffed and staff are grossly underpaid and inadequately trained because that would cost money and reduce the overall profit.  They also ignore the fact that mistakes and neglect in patient care can lead to injury and death. Oversight and regulation help minimize these problems.

Once again the Trump administration is working for corporations at the cost of the people who pay for their services.  Next time you write or call your representatives, consider raising concerns about this issue. And next time you or a loved one need nursing home, or any health care, make sure you ask lots of questions and don’t assume they always know what’s best.