By now I i 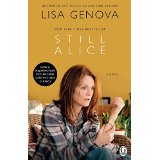 magine most of you reading this have heard of Still Alice by Lisa Genova, or at least the movie based on it starring Julianne Moore as a linguistic professor who is diagnosed with early-onset Alzheimer’s Disease.

I always have my eye open for non-textbook materials for students to read in my Mental Health and Aging class so my read of this book was with that in mind.   I have relied on chapters from Mental Disorders in Older Adults (Zarit and Zarit, 2011) and The Alzheimer’s Project from HBO Documentary Films.  Zarit and Zarit provide excellent clinical material, in particularly useful insights on when memory loss is normal and when it’s a sign of a larger problem. The Alzheimer’s Project includes a series of films about the science behind ongoing research on Alzheimer’s; profiles of individuals with Alzheimer’s, their families, and the many challenge they face; and a variety of supporting materials.

Still Alice is definitely a candidate to add to the list next time I teach this class. Why? For one, it’s a quick, easy, and engaging read that would provide a nice complement to Zarit and Zarit.

Second, the story focuses on early-onset Alzheimer’s. While less prevalent than later onset of the disease, it is equally devastating to the individual and his/her family and includes some different challenges. In particular, with onset in the 50s, 40s, or even earlier, it disrupts a different stage of life – mid- or even early- career, perhaps younger children, and a different orientation to the future.

Finally, it’s told from the perspective of the person with Alzheimer’s. To me this was one of the most compelling aspects of the book and Lisa Genova has clearly done her research. Watching from the inside as Alice declines, her efforts to cope, and her increasingly infrequent moments of clarity is gut wrenching. In her mind, her husband goes from John to that man in the chair or the man who owns the house, her daughter Anne becomes the Mother, and her daughter Lydia is the actress. Her thoughts repeat and twist back on themselves. Something that seems so important and monumental one moment is forgotten in the next when her attention is captured by something else. It’s this perspective that I think will make it a good addition to a syllabus. As social workers, we always try to start where the person is and empower them to the extent they are able, but it can be difficult to do when the individual has a hard time communicating. Having a window into where someone with Alzheimer’s is, even if that window is a fictionalized one, seems like it would be of great use to social workers and other health care professionals.

I just had two wisdom teeth pulled at the age of 45. (This is a statement of fact and possibly a disclaimer for the content of this post). It was the easiest dental procedure I’ve ever had with the help of a little IV sedation, something that was not an option when I had teeth pulled as a kid. (Hooray for medical progress!) My memories of those previous teeth pulling events are dramatic. Big needles of Novocain and lots of twisting and pulling and cracking (possibly exaggerated in my memory). The last thing I remember today as I was getting woozy was thinking that Wisdom Teeth is a stupid name and then my husband was tucking me in at home for a nap. Soft foods and no spitting are my main restrictions (i.e., soup and ice cream for lunch and no watermelon seed spitting contest). Dentistry has come a long way and its importance to overall health, particularly for older adults, does not get the attention it deserves. Perhaps that’s a post for another day when I can chew on something more substantial.

But for now, back to this name thing. Supposedly the third molars are called Wisdom Teeth because they typically come in between the ages of 17 and 25, much later than the rest of our teeth and when we are so much wiser. Thinking back to myself at that age, more appropriate names might have been Obnoxious Teeth, Stubborn Teeth, Naïve Teeth, Spoiled Brat Teeth, Clueless Teeth, etc., etc., etc.

I wonder if that means that today I lost half of my obnoxious, stubborn, naïve, spoiled, clueless qualities?

In the Sunday, Feb 8 issue of the New York Times there was an article about the impact of the economic crisis and extreme austerity measures in Greece on health care.  This NYT article looks in particular at the shortage of nurses forcing hospital patients to hire private nursing care. Enter the entrepreneurs and a burgeoning business of selling illegal nursing care. Not surprisingly, the “nurses” (mostly or entirely women I assume) who provide this care are untrained which is leading to a variety of noticeable consequences. Besides substandard care for individuals (an important issue in and of itself), there has been an increased spread of illnesses in hospitals because the illegal nurses are not following basic hygiene protocols like wearing gloves.

Given that I’m thinking about health care workforce issues a lot right now, this article caught my attention and made me wonder what data is available related to health resources (particularly workforce) and health outcomes. No one is expecting such extreme problems in the countries I’m looking at (the U.S., Finland, and Estonia), but they are anticipating a shortage of health and social services workers adequately trained to work with our aging populations. Beyond the substitution of unqualified and untrained workers, what impact might a worker shortage have? It’s easy to imagine the impact on an individual’s health through delays in care, not getting care at all, or getting inadequate care. But what about a population’s health? Does a shortage of health care workers, make us, as a country, less healthy?

The short answer seems to be yes. A variety of studies both between and within countries have found that the density of health care workers (i.e., the number of workers divided by the number of people in the population), particularly doctors and nurses, is associated with health outcomes ranging from maternal and infant health and mortality to mortality, hospitalization, and spending among Medicare beneficiaries in the U.S.  Of course, it’s probably more complicated than density alone. Geography, race, and FTEs (i.e., the amount of care provided vs. the number of workers) are important too.

There’s not as much data on other types of health workers such as community health workers, social workers, and complementary and alternative medicine practitioners. Nor is there as much focused specifically on outcomes among the older population as there is about mothers and children. (At least I haven’t found it yet – if you know of some, please share!). Given that geriatricians, geriatric nurses, and geriatric social workers are where health care worker shortages are predicted to grow over the coming years, some understanding of what counts as a shortage and what impact that may have is worth thinking about.

I’ve been trolling through World Health Organization data for the United States, Finland, and Estonia. (Yes, more fun with data!) For anyone interested in global comparisons in all things health-related, WHO is the place for you. It is a treasure trove. I’m only at the beginning of this part of my project (or any part of my project, to be completely honest) and there is lots to look at, but here are a few things that have caught my attention so far.

In 2011, Finland had more mental health outpatient facilities, beds for mental health in general hospitals, community residential facilities, and more beds in those facilities than the United States. The latter is most striking with Finland having 134 beds per 100,000 people compared to only 22 in the U.S. On the other hand, the United States has slightly more mental hospitals compared to Finland and more beds in those hospitals. (According to the only data available on these variables, Estonia has more mental hospitals than either Finland or the U.S.). This dramatic difference in community-based facilities highlights a significant gap in U.S. services for the mentally ill. If you need to put a face on why this matters, read this story in The Washington Post.  People cannot get into hospitals when they need it because of lack of beds and others can be held in the hospital against their will because there is no place to discharge them to. Not surprisingly, it costs much less to support someone in the community than to keep them in a hospital. Why then is the U.S. not investing more in community-based resources? (A topic for another day). 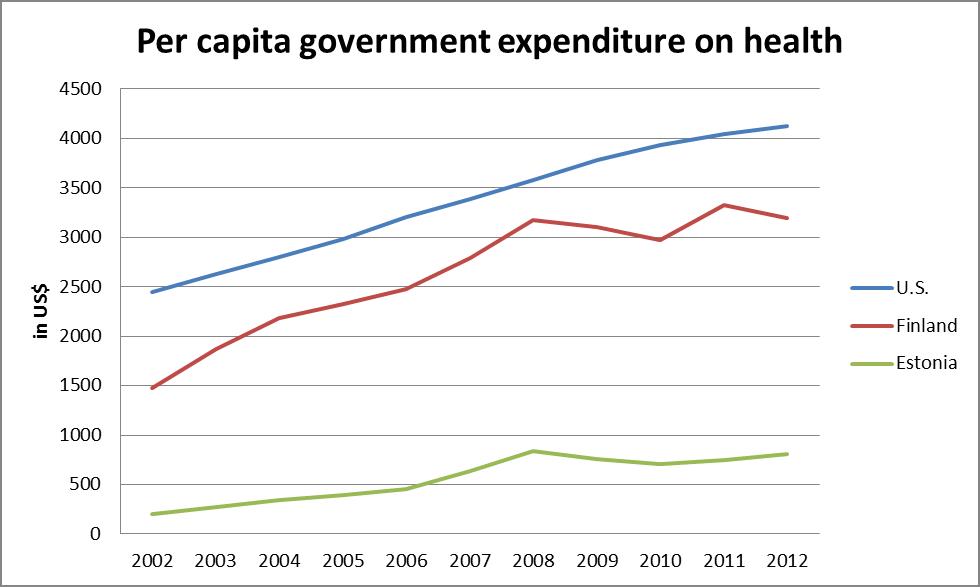 So even though most of us pay something for our health care coverage, for many of us our employers pay something as well, and there is great variation in terms of the levels and type of coverage we each can afford, the U.S. government is still spending more per person than two countries where the state provides equal coverage for everyone.

Yes, I hear some of you saying, that the citizens pay for it through much higher taxes in Finland and Estonia. That is true. It’s the equal coverage part I’m interested in here. Yet another topic for yet another day – what citizens in each country get for the taxes they pay and how this relates to quality of health care and overall health outcomes.