I woke up this morning with voices in my head and I’m trying to figure out which ones are mine.  That’s a problem with listening to audiobooks. More so than reading a book I hear a character’s voice, or sometimes even the author’s voice, in my head. I fell asleep yesterday with Anne Lamott’s voice in my earbuds.  I like Anne Lamott even though she gets too full of god and jesus christ sometimes.  Her saving grace – ha! – is that she’s self-effacing about it all. She’s not trying to save anyone, but it’s so much a part of who she is that it can’t not come out, and it clearly saved her from alcoholism, and she’s so imperfect and struggling and let’s it all hang out, and she’s so liberal, too that I can listen without wanting to smash my fist into her face.  So it may be that these musing end up sounding a bit like Anne Lamott.

Not too long ago a couple of Seventh Day Adventists came by to try and save me.  I was working out front cleaning Suzy Subaru and when they pulled into the driveway I knew at once what they were here for.  They were nice enough, two women trying to spread the word in a way they thought might appeal to Ann Arborites I suppose although this isn’t really Ann Arbor.  “We’re talking to people in the neighborhood about our bible study and wanted to ask you, what do you think God thinks about war.”  I paused a moment and said, “Well, I’m an atheist so to me that’s not a very relevant or even particularly interesting question.”  Their eyes got very big and they backed away as they told me to have a good day.  Not even a blessed day. Harumph. What kind of proselytizers were they anyway?  I would have thought this would be a challenge they could sink their teeth into. A real notch in their Bible if they could do something with me. But like all Bible thumpers they were cowards at heart and turned tail and ran.

That sounds harsh of me I suppose, and I did have a momentary pang of guilt, but I have come to believe that religions, even the most benign versions, were created and continue out of fear.  That’s okay. We all have to cope somehow.  It’s when their coping infringes on the rights and lives of others that I get a bit tetchy and if you’re going door to door it seems to me you should be prepared to have difficult conversations.

It’s Christmas Day.  7:07 AM. The stockings are hung by the stovepipe with care and St. Nick has already been by to stuff them. He left a mug for me on the coffee maker.  I’m drinking out of it now. It’s emblazoned with a close up of Malcom X, fist raised in defiance, and a quote, “If you don’t stand for something you will fall for anything.” What is Santa trying to tell me?  Oddly enough he left Husband a mug on the coffeemaker too.  It has an etching of a Sasquatch silhouette. Clearly Santa’s sense of humor is a bit warped.

There’s a small Christmas tree with a few lights and a handful of the possible range of decorations hanging on it. Today or tomorrow it will be planted in the backyard and hopefully we’ll buck our trend of killing formerly live Christmas trees. Usually we wait too late to plant them, but this year I managed to dig the hole before the ground froze. Except it hasn’t.  It’s unseasonably warm and very brown and I keep forgetting it’s Christmas.

I dug the hole early, but the tree was only decorated last night, not because it’s some Toler-Woodward household tradition, but because we just didn’t get around to it until then. That’s 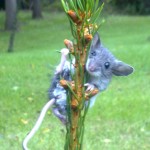 just the way we role. We wrapped lights around the porch posts last night too, but true to form, the two strands are different colors so we have a warm white post and a cool white post. Some days, like this morning, I’ve come to accept that we’re half-ass people. Yes, I got most of my shopping done early, but packages still won’t get mailed until after Christmas.  Happy New Year!  Some of those packages will include very late gifts from other occasions.  Happy Father’s Day!  And it will be good. Just hang in there.

Other days I gnash my teeth and try to be more Martha Stewart like. I’ll pull everything out of a closet and go looking for the perfect bins to organize everything and label the bins and then I lose interest and it sits on the floor for several weeks until one of us gets tired of stepping over the piles and tosses it all back in so that, if possible, it’s an even messier pile than it was originally.  I have to remind myself periodically that Martha Stewart has paid staff.  So as long as no one is injured when things fall out of the closet and the dust bunnies don’t line up for breakfast with the quadrupeds it’s all good.

And I guess in an odd way that’s kind of where I started these musings. I try on different voices and different ways of doing things and most of the time end up back in the one that’s comfortable, imperfect as it is, with maybe a small tweak or an adjustment or refinement here or there.

Malcom X needs a refill and the dust bunnies are mewing for breakfast so it’s time to wrap this up.  Happy Holidays everyone.  This blog will return to it’s regular programming at some undesignated point in the not so distant future.